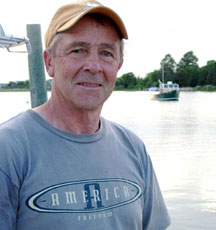 Howard Pickerell is a traditional commercial boat builder and bayman born in Huntington. His father Howard was a full time clammer, while his older relatives were carpenters. Growing up, he learned to harvest clams which were plentiful in Huntington during his youth. From the time he was old enough to walk, Howard accompanied his father on his clam boat. By the time he was a teenager, he began building garveys, a traditional flat bottom boat used by baymen, for himself and his friends. He began to build boats for sale in his late teenage years, a tradition that he continues today. Howard was also a resourceful baymen able to make a healthy living for many years on the bay. “We could harvest a bushel an hour, about 600 to 700 clams, at $8 a bushel. As a kid I made good money. When I finished high school I went on the bay full time.”

Howard did well as a commercial fisherman, harvesting clams, his mainstay, and scalloping, which was a seasonal activity. Where many could not find clams, Howard could. “I can find clams. Although I did not know Southampton baymen, after a year or so it got to the point where they were following me around. If they are there I’ll get them.” At the same time he had dozens of baymen who wanted to buy his boats. Eventually he decided to move to Southampton, where the water was shallower and therefore easier to clam. He had strong connection to the East End baymen through his boat building business. Howard has built hundreds of commercial fishing boats, garveys, and sharpies, a traditional East End boat characterized by a sharp point in its bow, and high sides. Although he prefers using a garvey, he knows that East End baymen prefer the sharpie because of their tradition. The designs have changed little over time; however, the materials have changed greatly. When Howard first began building he used local oak which was plentiful on Long Island. Today he is forced to use pressure treated white pine, mostly from Georgia, because there is no good oak left in the region. However, the boats last longer than more traditional wooden boats.

When the brown tide hit the East End, Howard turned to growing oysters, raising them in wire cages, a new technology being used on the East End by Cornell Cooperative Extension, the Town of East Hampton, and other government agencies. He is recognized as one of the most successful fishermen in this area participating in the program. “You had to clean them all the time —depends on when grass is growing—in winter you hardly had to touch them, in summer you have to clean them every couple of weeks for months because of grass fowling. The program had 100 baymen at first, but 95 percent of them disappeared that first year because they thought you just put them out there and watch them grow. It does not work that way. You have to maintain them. Right now I have 900 bags out there. I sell to mostly white cloth restaurants—high end restaurants. I sell them for a good price. I have a very high quality product.” At the same time he has seen a severe decline in his boat building business, due to the lack of commercial fishermen who no longer need his boats since they are no longer working on the water. “I cater to the commercial guys, and commercial fishing is over. Now I build 4 or 5 boats a year.” When asked what the future holds for local baymen, he replies “I don’t think there will be any baymen left on the water. We live on an island, surrounded by pristine water, and we can’t make a living on it.”