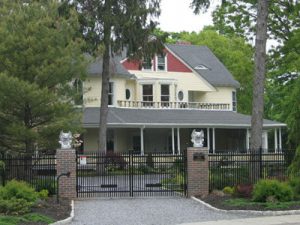 No. of Entrances and Placement: One front door on the south façade, one side door on the west façade.

Architectural Integrity: Moderate; the original roofing material has been replaced, as have most of the windows. A cast stone balustrade has been added to the front façade of the second floor.

Description:
This house looks like it may have been built at two different times, in two different styles. The front façade, which faces south on to Middle Road, is in the Queen Anne style. It features the signature complicated roofline and tower projection. The section to the rear of the house, however, features decorative elements that are typical of Italianate architecture, such as prominent hood moldings and eave brackets. Both portions stand two and a half stories high and together create a somewhat L-shaped plan. And both are clad in yellow-painted clapboard, with red-painted clapboard at the gable ends. Details are trimmed in white.

The Queen Anne portion has an eave front gable end roof that features a small eyebrow dormer and a prominent gable projection. A pair of one-over-one double hung windows appears in the projection’s gable end, a three-sided bay window projection below them. A tower with a conical roof also interrupts this roofline. It features three one-over-one windows. This portion of the house has a wrap around porch that is supported by spindle posts.  A cast stone balustrade has been added above the porch roofline. An exterior brick chimney is located at its north façade.

This Italianate portion of the house has been obscured, and a one story gabled wing has been added to it, which extends west. This portion stands three bays wide and features wide bracketed eaves and fascia trim. The two-over-two original windows are capped by prominent hood moldings. A three-side bay window extension features on the south façade. It has an interior brick chimney at its center.