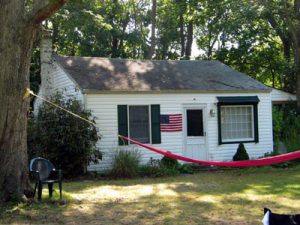 No. of Entrances and Placement:  center eave front facade.

Description:
This is a structure typical of summer cottages constructed during 1930-40 as seasonal residences.  The cottage retains its original floor plan and fenestration pattern.

History:
Oakdale had a series of summer cottages built during the 1930s and 40s that were sold or rented through advertisements in local newspapers as well as the New York Times.  Sale prices ranged from $400 – $700.  In addition some Queens developers such as the Schaefer corporation also sold lots in the same price range.

This cottage and 7 E. Shore Road were built by George & Mary Veres, who had purchased the property from Kenneth & Anne Duncan on May 23, 1944.  At the time of the sale the Duncans were living separately outside of New York State.  The Veres then sold the lots and structures to Helen Van Essendelft on December 22, 1944.  At the time Helen was living at Somerset Avenue in Cambridge, Maryland, on the eastern shore.  The Van Essendelfts also bought the lots across the street where they built their house, which remains standing.  The E. Shore Road property was originally part of William K. Aston estate in the early 1900s.