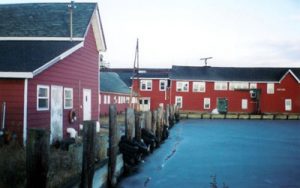 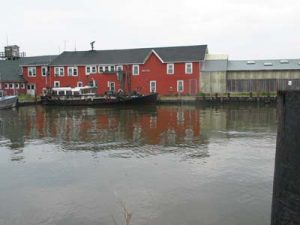 Window Style(s):  One over one

Architectural Integrity:  Low, Moderate, High. The sheds on the north side of Canal Street are severely deteriorated and in need of stabilization. The bulk of the complex is in reasonably good condition.

Description:
The Bluepoints Oyster Co. site is a rambling complex of 21 wood frame industrial buildings, or oyster houses, situated on 3.5 acres of waterfront land. The buildings hug the shore at the foot of Atlantic Avenue in West Sayville. The site is bounded by Atlantic Avenue to the west, a field to the north, Clyde Street to the east, and the Great South Bay to the south. The buildings are located at the water’s edge, with the exception of 2 one-story sheds that sit on the north side of Canal Street. The property is bordered by the twelve-acre Long Island Maritime Museum to the west, and by a nine-acre county-owned parcel to the east.

The sheds are arranged in a roughly “L”-shaped plan around the Bluepoints marina.  They are clad in wood clapboards painted red, with white-painted trim. The roofs are of wood and asphalt shingle, and are primarily gable end, with their ends facing north-south. Only one building’s gable ends run east-west, facing out on to the bay. Fenestration is irregular, with single and double one-over-one configurations.

Historical Information:
The history of this property began with a colonial patent for 13,000 underwater acres of Great South Bay to various prominent local families in 1693. Jacob Ocker of Oakdale bought up these various deeds in the late 19th century. Among the first buildings on the site was the Ocker Oyster Plant (Figure 3).Built at the turn of the century, it is now the central building that runs along the north side of the marina, its gable roof sloping toward the water.  It was one of the main buildings used for cleaning and sorting oysters. Early 20th century sheds that were used for clam-seeding stand at the east end of the site.

As recently as 2002 the West Sayville plant was still being used by the Bluepoints Oyster Company to transfer “seed” oysters to and from a creek site in Mattituck. Tiny seed oysters were spawned and fertilized at Bluepoints, then transferred to a creek on the North Fork for cultivation. Once they reached a certain size, they were brought back to the Great South Bay to mature and acquire the unique Bluepoints flavor.