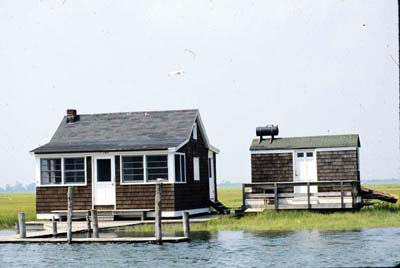 Bay houses are small shacks that stand on the South Shore’s marshlands in the Town of Hempstead that were originally built in the 1700 and 1800s by fishermen, baymen and duck hunters for shelter while they harvested clams, salt hay or went duck hunting. Through the years they have been passed down among their families.

During the 1940s – 1960s other residents built bay houses as weekend getaways; by 1965 there were over 200 bay houses. In 1965 the Town of Hempstead removed most of the bay houses in an effort to preserve the sensitive wetlands on which they stand.

As a result of research and subsequent publication of On The Bay, written by director Nancy Solomon, the Town decided to preserve the fragile structures for future generations. Today there are approximately 30 bay houses remaining. To educate visitors and residents Long Island Traditions conducts an annual bay house tour. In 2020 filmmakers Barbara Weber and Greg Blank completed “A World Within a World” which has garnered several festival acknowledgements.