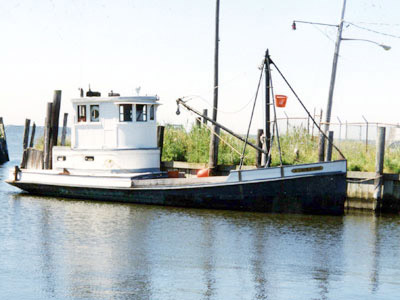 Since the 1700s there has been an active commercial fishing economy on the south shore.  Baymen and fishermen have harvested eels, killies, clams, oysters, scallops, blue claw crabs, bait crabs, fluke and flounder and other marine species.  While the fishing economy has declined drastically since 1985, when the brown tide decimated the scallop crop and over fishing claimed other shellfish and finfish, there are still small communities of fishermen who work on the bay and ocean for their livelihood.  They can frequently be seen in Freeport, Bay Shore, Patchogue and other waterfront communities.

While fishing forms an important part of the region’s occupational and cultural traditions, there are surprisingly few structures that reflect this economy.  Prominent examples include the former Bluepoints oyster company in Sayville, a historically preserved net reel in Westhampton Beach, and various fishing shacks near Captree State Park, that fishermen used to dry their nets, store their tools and to shuck oysters, clams or scallops.  Many of the older commercial structures no longer stand because they sat on valuable waterfront property that has been developed for houses, condominiums and other real estate uses.  At the same time there are numerous archival reminders of this maritime heritage, preserved in photographs, paintings and other documents. 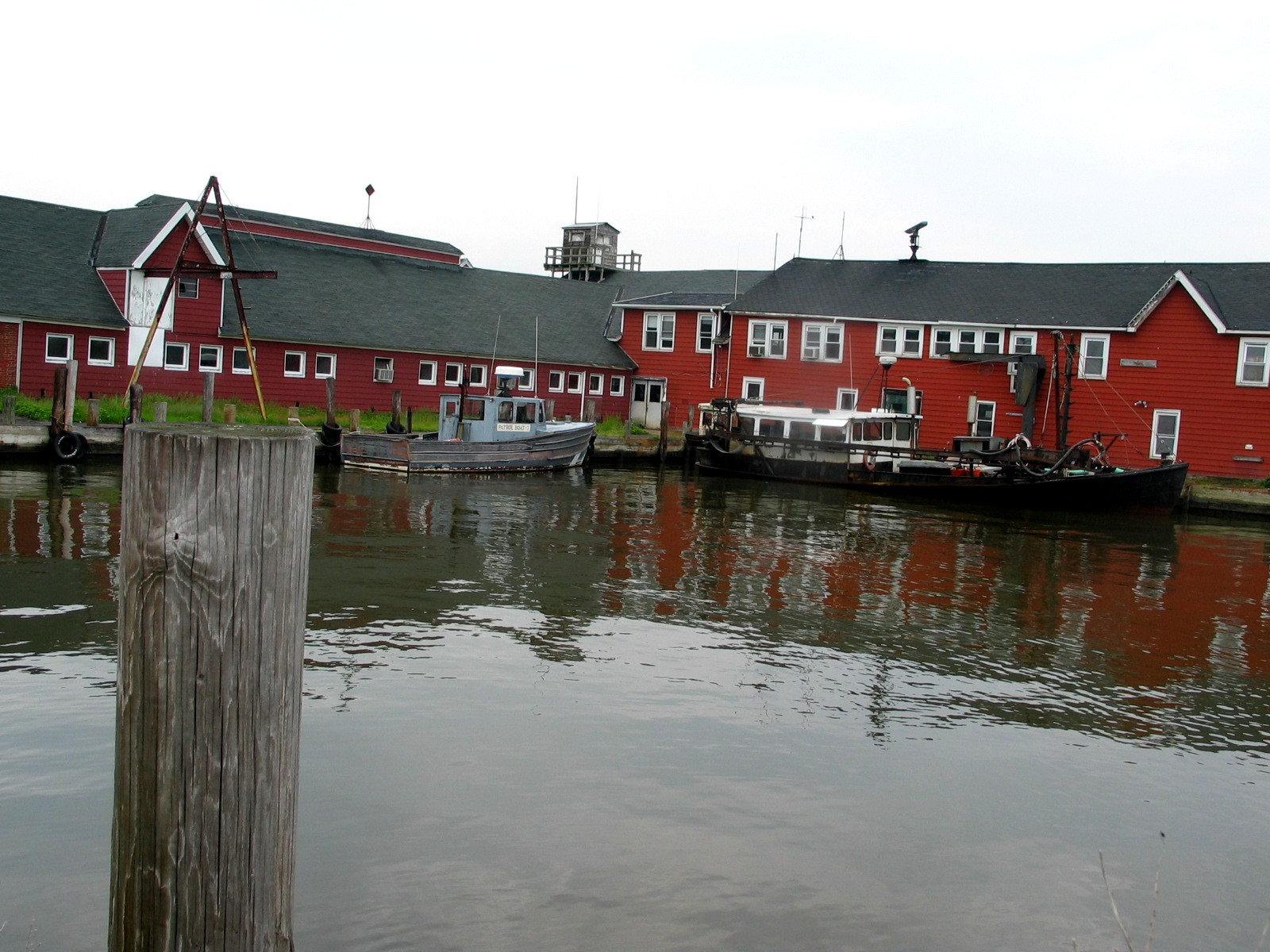 The buildings that constitute the former Bluepoints operations, located at the foot of Atlantic Avenue in West Sayville, were directly related to the fishermen’s ability to unload a day’s catch.  Boats could dock directly behind the loading dock, which was surrounded by land on three sides.  Bulk heading was later added to stabilize this area.  The company erected a set of train tracks that connected to the Long Island Railroad.  Eventually road improvements made train shipping obsolete, replaced by trucking.

The architectural design was typical of industrial buildings during the late 19th century – 2-story gable end structures that were attached, allowing for easy transport of the shellfish from one stage to the next.  Offices were located on the 2nd story, overlooking the work areas so that managers could observe the shuckers and other workers.  Other important architectural features included double sash and casement windows, gable entrances which were a traditional feature of Dutch homes and barns in the colonial period, and clapboard siding.  The distinctive red color of the buildings, and the white water tower were aids to navigation for offshore boats.

Other former oyster houses still remain in West Sayville.  The Vanderborgh oyster house sits at the terminus of West Avenue, adjacent to Kingston’s seafood restaurant.  Kingston’s was once the home of the Long Island Fish Company.  At the Long Island Maritime Museum stands the Rudolph Oyster Company house, a National Historic Landmark.  The Rudolph property is modest compared to the Bluepoints operations, reflecting the earlier small-scale operations of the family owned businesses.  The gable-front frame structure had interior shelving that allowed workers to easily shuck and store oysters for shipping.

At all the oyster houses the men shucked local oysters, canned them and prepared them for shipping to various fish markets around the country.  The crates were originally placed on train cars and sent to New York City.  By the early 20th century trucks began transporting the goods, a practice that has continued to the present day. 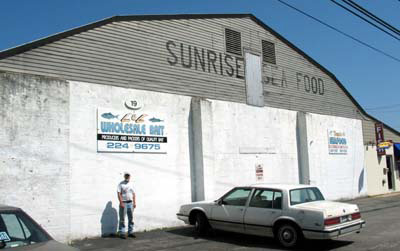 There are two prominent commercial fishing operations located on the border of Bay Shore and Islip.  L & L Baits owned by fisherman Lenny Nilson is on the site of the former Doxsee clam company.  They catch silversides which are sold to recreational fishermen as bait.  The building is a rectangular concrete structure topped by a corrugated metal gambrel roof.  Along Orowoc Creek is Crabs Unlimited, a non-operating wholesale and retail fish market.  The building appears to be circa 1930.  Across the creek is the Whitecap fish market where several commercial fishing boats dock.  The market is a c. 1930s frame structure that has expanded to include an outdoor fish restaurant and bar decorated in nautical themes.  The market was founded in the early 1900s and continues to buy locally caught fish. 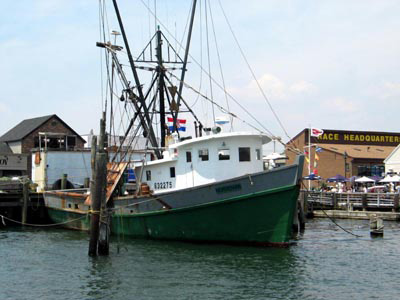 There once were dozens of commercial fish operations in this historic community, but many of the original structures have been replaced by retail businesses.  Original sites include docks along South Main Street where the Granau family operated a commercial clamming operation, and Woodcleft Canal which was once dominated by commercial fishing boats.  Today there are two modest commercial fishing docks with adjacent freezers for storage.  Boats include the E.T., the Norseman, and the Ashera which are primarily day boats, harvesting fluke, flounder, squid and ocean surf clams.  The docks are located behind the Two Cousins Fish Market and Captain Ben’s Fish market.  Tall narrow freezer buildings used by the fishermen to store their bait can also be seen on the street.  Bayman like Cory Weyant store their traps and fishing gear at their homes, a common sight along the village canals.  Some baymen also dock their boats at their residences. 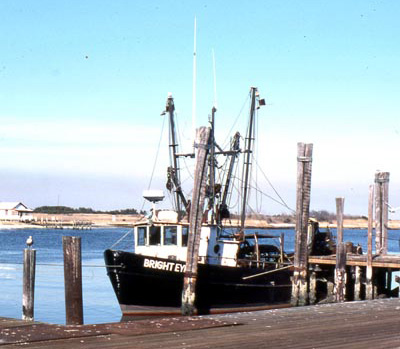 The historic Doxsee clam processing building is located on Bayside Avenue in Point Lookout.  This building is similar to other marine industrial buildings including the former Maresca boatyard in Freeport (now the Long Island Marine Education Center) and the Scopinich boatyard (now Shelter Point marina).  The Doxsee building is a 2-story concrete structure with an interior shucking and sorting area, preparation area and packaging area.  The building is painted white, a common feature in maritime related buildings.  The waterfront location on Reynolds Channel provides protection for the trawler boats and allows for easy unloading of the hydraulic dredges that harvest the offshore skimmer clams.  The upstairs houses a casual office and kitchen for the staff.  Outside the ground floor entrance is a large anchor and other nautical items, a typical practice among marine related industries.

Traditionally there have been various structures used to dry haul seine fishing nets, ranging from platform tables to simple pole structures.  However the most common type was a net reel, a large pole structure that closely resembles a ferris wheel.  Fishermen built their reels along the shorelines, near their bay houses, and on inlet passages throughout the estuary, until the mid-1960s, when synthetic nylon nets replaced cotton nets.  The nylon nets could quickly dry by hanging from the boat masts.

Today there is one preserved historic net reel, owned by the Westhampton Beach Historical Society which can be seen adjacent to the Beach Lane Bridge.  The Society is currently restoring the reel.